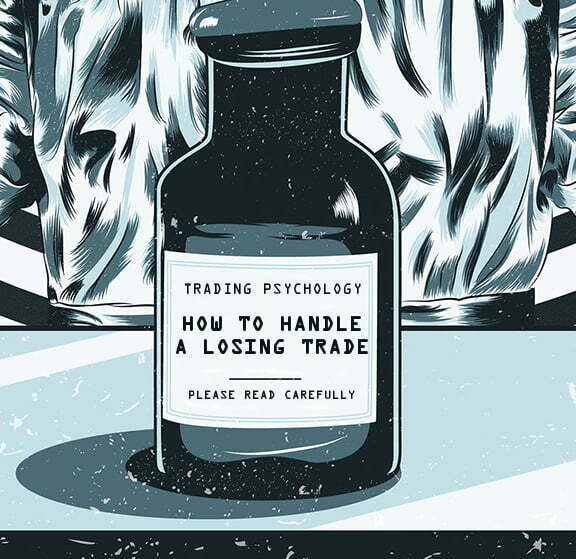 How To Handle a Losing Trade

In this choppy, uncertain crypto market of the past month or two you can quickly enter a trade thinking everything will go according to your plan only to get swiftly closed out when the tide turns against you, despite all odds. When a trade goes bad, you must be able to stay calm and restrain yourself from doing something stupid. Sound easy but in reality, your monkey brain gets emotional very quickly, pushing you to do suboptimal decisions. Here I’ll portray on overview of what you shouldn’t do after losing a trade, how you can restrain yourself from it and how you can get your mind back on track to do those money making moves.

After seeing your equity evaporate, you’re probably in a very irrational and emotional state as a trader. One of the most common mistakes rookies and even experienced traders do after taking a big loss is immediately getting back into the market with another trade. While I can understand why this is tempting, it’s a horrible idea in most cases as you most likely won’t perform as well in the state that you’re in. Instead I recommend you take at least a few minutes off and do something non-trading related that calms you down and gets you in a good mood again. After you’ve composed yourself, take some time to systematically and objectively reassess the situation/market. Ask yourself what has caused you to lose the trade? Have market conditions shifted? Perhaps the price reclaimed new important levels? Is there a new trading opportunity based on the latest market structure? Chances are, if you’ve been diligent in following your trading strategy and have been stopped out, the market probably moved a fair bit in a direction you weren’t expecting, which deserves your attention and objective reassessment of the facts before entering into a new trade.

The second “popular” mistake traders do after losing is flipping their bias completely, believing that they’ve been totally wrong with where the market will go. While it does look like the market is more bearish than you’d expect if you got closed out of a long position, it’s not necessarily the case. Perhaps you’ve set up your stop loss incorrectly (either at a turning point or above the point of invalidation) or it could just be bad luck. After being closed out, objectively analyze the price movement. Is it really moving in the opposite direction or does it look like a test of a support line? Either way, being closed out doesn’t immediately you’re your trading idea was completely wrong. Often you’ll find out that there will be a squeeze pressure before moving the price in the expected direction.

Some traders decide to double down after being pushed out of a trade, thinking the market must eventually turn around or that it “owes them” a win, especially if they were on a losing streak. This is called the Gamblers fallacy and it can lead people to ruin if they don’t recompose themselves. Disregarding your risk management system and entering a new position immediately is without doubt one of the worst things you can do. Always make sure you’ve calmed yourself and assessed the situation objectively before entering a new trade.

Another frequent mistake traders make is stop using the trading setup that failed them a couple of times. No strategy works 100% of the time, no matter how well planned and executed. Even the most sophisticated and experienced traders can’t predict the price movement correctly and no strategy gets even close to 100% accuracy. And it doesn’t need to have 100% to be good. The key here is that a strategy must work well enough to make you profit over the long term, after executing many trades with it. Discarding a strategy solely based on a few fails is not ideal as it could still make you profit in the long run. That said, it is possible a strategy does really stop working but it is rare. Before throwing it out the window, you could backtest it to gain more data instead of relying on your five last use cases.

Lastly, a fool’s mindset is telling yourself you have to “make it all back” after losing. Instead of fixating on how you’re going to recoup the loss, take it as it is. Check if you missed something, what you could’ve done better, what was the reason the setup failed and then leave it be. Even if you’ve done everything perfectly, something totally unexpected could’ve happened that shifted the market so swiftly it closed out your trade. If you enter your next trade with a mindset of “making up for the last one”, you’ll likely perform sub-optimally, rushing in or entering a trade that you wouldn’t, had you been calm and unbiased. Instead, find the next trade by sticking to your strategy and rules, and view it as an independent opportunity to create profit.

To prepare yourself beforehand for losses, there’s a few things you can do. First, make sure you expect nothing entering a trade. Instead of hoping you guessed the movement correctly, approach it as objectively as possible, as anything can happen despite the chart checking all your boxes. Second, approach the trade proactively and not reactively. What I mean by that is imagine how it would look like if the trade failed beforehand. By rehearsing it, you’ll start to anticipate how you’ll feel and if it really does happen, you will not react too heavily. Many experienced traders do this unknowingly as they’ve gone through so many trades that they know how it’ll feel and they look at it very objectively.

Finally, know that it gets easier with time and experience. When you start your trading career your losses will undoubtedly have a larger emotional impact on you in comparison to when you’ve got years of experience behind your belt. Over time you sort of get immune to emotional losses, enabling you to focus on making rational decisions.

In the end, everyone falls prey to a losing streak from time to time, and there’s no best way of coping with it. Despite that, you must focus on moving forward and staying positive which will enable you to enter the next trade with confidence.